Q. Russia recently said “We’ll never return Crimea, It’s our own territory under 2014 referendum.” so, it seems “Might is right” in today’s world. Then should we not consider taking over PoK from Pakistan? After all, we already have conducted a successful surgical strike, and PoK people will definitely vote to join India if there is a referendum!

Ans. Sir, I beg to differ. Ukraine did not possess nuclear weapons, and Russia enjoys UNSC veto powers. Besides, it doesn’t fit well to India’s image as a ‘peaceful’ nation in the world forums.

Q. Suppose the USA initiates a UN-resolution to ‘condemn’ the Russian occupation of Crimea? Should India support it?

Ans. Sir, given our long friendship with Russia, we should abstain from voting in such UN-resolutions. During BRICS summit last year, our PM also said: “one old friend is better than two new friends.” [MISTAKE: should say “our Honorable PM”]

Q. Suppose USA initiates a UN-resolution to ‘condemn’ the Pakistan’s occupation over PoK, should India support it?

Ans. Yes sir, we should vote to condemn it.

Q. There is inconsistency in your answers- you want to abstain from condemning Crimean occupation but will vote to condemn PoK? 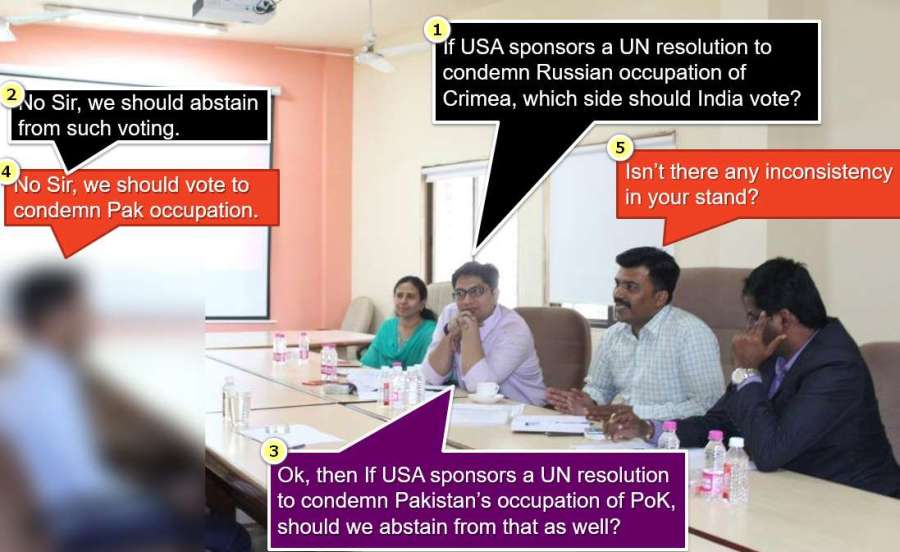 Q.ok leave it. Tell me something about Kanishka bombing.

Q. Recently, one of the accused in Kanishka bombing is freed by Canada- for the lack of evidence. What options does India have on this?

Ans. Sir, we can seek his extradition.

Q. But Canadian court already said there is a lack of evidence, so they may not allow the extradition. Should we approach ICJ or ICC for this? And what is the difference between these two international courts?

Ans. Sir, International court of Justice (ICJ) is to file a case against a nation; so we can’t approach it for an individual. Besides, India doesn’t accept ICJ jurisdiction over disputes with Commonwealth nations; and Canada is a commonwealth nation.

Q. and what about ICC?
Ans. Sir, International Criminal court is to file cases against individuals, mainly for genocides and war crimes. We can’t approach it because we are not a party to ICC.

Q. But don’t you think these terrorists are roaming scot free, be it this Kalistani group or Hafiz Saeed, so shouldn’t we JOIN ICC and then take these cases?

Ans. Sir, but then Pakistan will file fictitious cases against Indian army officers for committing war crimes and genocides in Kashmir and North East. Besides we’ve other avenues through which these terrorists can be brought to book. So in my opinion, we should not join ICC.

Q. Our Hon’ble prime minister recently said: “if we live with a mindset of the 20th century, we can’t solve problems in the 21st century”. Can you substantiate this with any of India’s foreign policy challenges?

Ans. Sir, in the 20th century, countries believed in mercantile policy that one nation’s profit is a necessarily loss for another nation. And it leads to protectionist mindset, we have to open up and reduce tariff…

My dear friends There is one thing which always clicks in your mind after coming out of the examination hall... Read More

My dear friends, In the present competitive scenario English plays a very important role in our day to day life.... Read More

Praveen Kumar, All India Medical CBSE Topper, had a plump job in corporate sector, but wanted to serve the... Read More